Ayam Cemani – „The Lamborghini of Poultry”

While we were writing about the Beluga caviar, we thought it might be interesting to also write about other exotic animal products, and the first thing we came across in our research that really caught our eye was this Indonesian breed of chicken, known as Ayam Cemani and called by some „The Lamborghini of poultry” (yes, you will probably laugh): 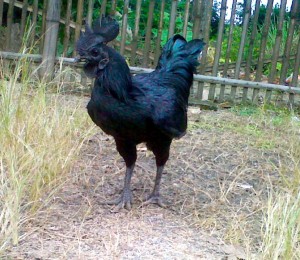 An adult costs $2,500 (or you can get a pair for $5,000) and that is because, obviously, they’re not really easy to get. And what’s more interesting is that behind the feathers, even though the black itself of its appearance already gives it an odd beauty, everything is black underneath as well: meat, bones, organs (surprising or not, the eggs are cream colored and the blood isn’t black either, although it is darker). The reason for all the blackness is a genetic anomaly called fibromelanosis and this was probably protected and nurtured in order to keep producing this kind of specimen in religious and mystical rituals, first in Java and then in other area of Asia. To Europe they got really late, in a time where we were way passed the use of chicken in religious rituals – in 1998, thanks to the Dutch breeder Jan Steverink – but the existence of had been mentioned by the old Dutch colonists as well.

These birds lay between 60 and 100 eggs in their first year, but very few of the hatching eggs will result in complete blackm which makes their population stay in a roughly limited size.

Thus it’s hard to say if the black meat of this Indonesian bird will ever become a trend in restaurants (even in luxurious ones), but it would probably be an interesting experience; even if black food doesn’t really sound very tempting, a skilled chef will surely manage to place it and associate it in the best possible way, in order to make it attractive and delicious. Meanwhile, make sure you have the proper professional cooking equipment.

Sorry, this entry is only available in Romanian.